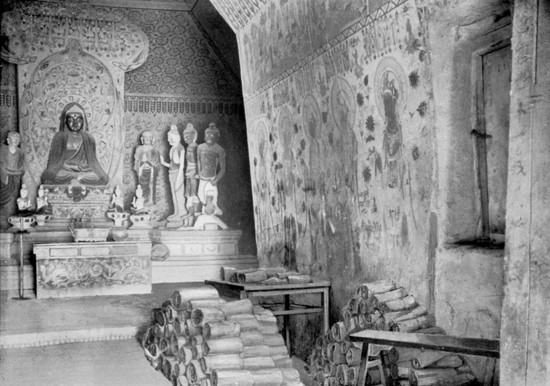 A little more than 1000 years ago in a small oasis town named “Dunhuang.” A frontier garrison of the silk road on the edge of the Gobi Desert in China. Somebody, we don’t know who sealed a cave just outside of town, it was within this chamber that over 14 cubic meters of bundled manuscripts were discovered. They sat there, hidden from the world for nine hundred years.

When the room, (which has now become known as the Dunhuang Library) was finally opened in the year 1900, it was hailed as one of the greatest archaeological discoveries of the twentieth century. This discovery has been compared with Tutankhamun’s tomb and even the Dead Sea Scrolls.

Found among them, was a manuscript containing the oldest star atlas known today from any civilization, likely dating as far back as the year 700 A.D. It shows a complete representation of the sky above China with over 1300 stars named and accurately presented. 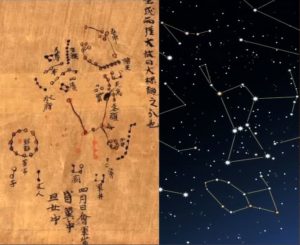 It’s discovery was such a huge surprise since such an early and accurate chart of the skies had never been seen before, from any civilization. However, despite it’s importance to the history of astronomical study it went unnoticed until a young man named Joseph Needham found it and published a paper as late as 1959 in his “Science and Civilization in China.”

The star atlas actually forms the second part of a much longer scroll (OR.8210/S3326) that measures 210 cm long by 24.4 cm wide and is constructed of fine Chinese silk paper in thirteen separate panels. It is with great pride that we have obtained the licence from The British Library to reproduce this scroll in full! We have only just started work on this project and will be releasing more as we progress to our ultimate goal of reproducing the full 2.1 meter long scroll.

The first part of the scroll is a manual for divination based on the shape of clouds. The twelve charts showing different sections of the sky follow these panels. Most stars have been named amd there is also a short explanatory text in each section, and finally the last chart is of the North-Polar region. The chart is unimaginably detailed for it’s time, showing a total of 1345 stars in 257 clearly marked and named asterisms, or constellations, including all twenty-eight mansions. It must be noted, that for a hand drawn map – this chart withstands modern day scrutiny and the positioning has held up well against modern techniques.

The importance of the chart lies in both its accuracy and graphic quality. The chart includes both bright and faint stars, visible to the naked eye from north central China, and was probably used as a reference material. Its origins and real use remain unknown.

The Dunhuang Star Atlas is now being held at The British Library in London along with many other items from the Library Cave and other ancient Silk Road sites. These unique items tell fascinating stories of life on the Silk Road from 100 BC to AD 1400. Most of these collections were dispersed to institutions worldwide in the early twentieth century, making it difficult to study them as a whole. The International Dunhuang Project (IDP) based at the British Library is now making these resources freely accessible to all via this multi-lingual website.

A percentage of every sale we make of our reproductions of the Dunhuang Star Chart goes towards supporting the work of the International Dunhuang Project and The British Library.