by Steven Burke on February 3, 2017 in Scientists

Perhaps one of the most  famous of Darwin’s notebook pages, this unpublished—Tree of Life. In the 130 years since he penned this simple drawing it has become a symbol of evolution and free thinking scientific thought, even featuring as tattoo’s it has truly cemented it’s place in pop culture for generations to come.

You can almost feel the haste in which Darwin wrote this page, the new dangerous idea’s flowing from his mind to paper. This is the full page 36 from Notebook B—Transmutation of Species, written towards the end of his famous Beagle Voyages, which later became his theory of Evolution by Natural Selection.

The tips of the branches show the species that are still alive today, and the truck shows all the species that have existed before it, all sharing a common ancestor at the beginning. And now with the knowledge we have today, we know that from a gorilla to a squirrel, we share common cellular structures, parts of our DNA are the same. You can take a gene from another organism and any other organism can recognise the code. He was right. The power of time and evolution are evident all around us, all you have to do is look at the diversity of life around us.

Darwin explains: “’From the first growth of the tree, many a limb and branch has decayed and dropped off; and these fallen branches of various sizes may represent those whole orders, families, and genera which have now have no living representatives, and which are known to us only in a fossil state.’ 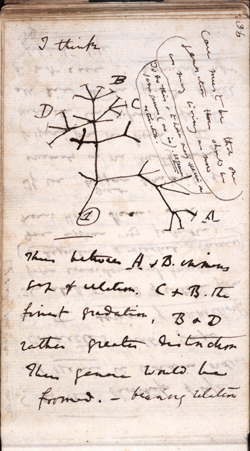 [below figure] – “Thus between A & B immense gap of relation. C & B. the finest gradation, B & D rather greater distinction. Thus genera would be formed. — bearing relation “

[p.37]  – “to ancient types. — with several extinct forms for if each species an ancient (1) is capable of making 13 recent forms. [there are 13 lines in the sketch that have a perpendicular line at the end] Twelve of the contemporary’s must have left no offspring at all, [there are 12 lines that are without a perpendicular line at the end] so as to keep number of species constant.”