The Art of Christian Gottfried Ehrenberg 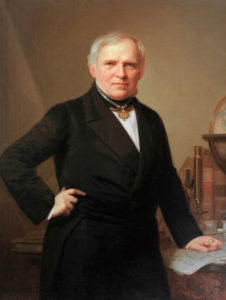 Christian Gottfried Ehrenberg (19 April 1795 – 27 June 1875) – was a German naturalist, zoologist, anatomist, geologist and microscopist who was considered to be one of the most productive and well known scientists of his day.

Between 1820-1825 with his friend Wilhelm Hemprich set out on a scientific expedition to the Middle East during which they collected thousands of specimens of plants and animals. After his return Ehrenberg published several scientific papers on insects and corals and two volumes entitled Symbolae Physicae which included many mammals, bird, insects the general public in Europe had not seen before. 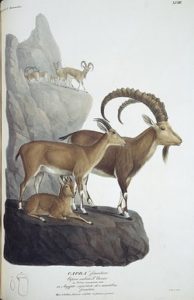 You see you may be asking yourself, so what, there were a lot of naturalists in his day, you said before that you was widely known in his day, why? Simply put, his artistic ability was amazing!

After a few years as professor of Medicine at the Berlin University (1827), and a expedition through Russia to the Chinese frontier, he returned to German to focus on the study of microscopic organisms.

For the next 30 years Ehrenberg examined samples of water, soil, sediment, blowing dust and rocks. He described thousands of new species, among them well known flagellates, cilates and many fossils. It’s an amazing career when you look back on it he published over 400 scientific publications. He was particularly interested in a single cellular groups of protists called diatoms, but also described, and named, many species of radiolaria, foraminifera and dinoflagellates.

The entire time he was studying these fanciful creatures he kept a wonderfully illustrated record of his view of the micro world. Until Ehrenberg took up the study it was not known that considerable masses of rock were composed of minute forms of animals or plants. He also demonstrated that the phosphorescence of the sea was due to organisms.

Here is a small sample of some of that work. Beautiful aren’t they? 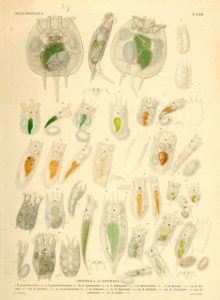 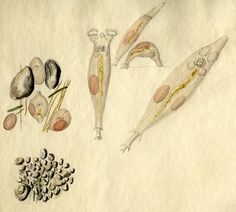 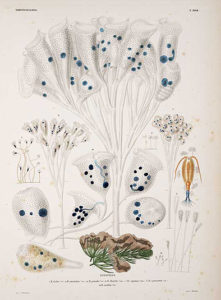