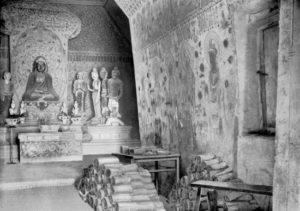 Welcome the the Dunhuang Star Chart Restoration Project – Our ultimate goal is to reproduce the entire 3.5 metre long manuscript, but until that goal is complete we are releasing the individual months as a poster series. You will see our work below.

The story of the manuscript is like something out of a movie – A little more than 1000 years ago in a small oasis town named “Dunhuang.” A frontier garrison of the silk road on the edge of the Gobi Desert in China. Somebody, we don’t know who, sealed a cave just outside of town. Within this chamber was over 14 cubic meters of bundled manuscripts from the Tang Dynasty. They sat there, hidden from the world for nine hundred years.

When the room, (which has now become known as the Dunhuang Library) was finally opened in the year 1900, it was hailed as one of the greatest archaeological discoveries of the twentieth century. This discovery has been compared with Tutankhamen’s tomb and even the Dead Sea Scrolls. Found among them, was a manuscript containing the oldest star atlas known today from any civilisation, likely dating as far back as the year 700 A.D. It shows a complete

representation of the sky above China with over 1300 stars named and accurately presented. This is that manuscript. Read more at our blog or visit the International Dunhuang Project page that has fully analysed the manuscript and others found in the cave.

This collection is Made in Australia under licence from The British Library.